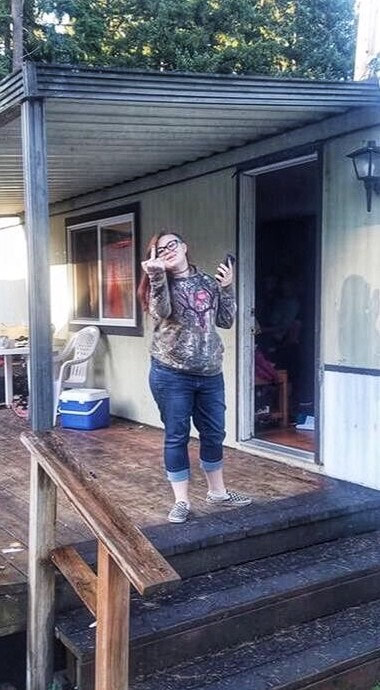 I live in Arizona, was trying to find a process server to serve my boyfriends ex (pictured to the left) her Summons who lives in Washington. Not knowing where to go, I found a process server through thumbtack, to find someone cheaper and more dependable than the sheriff dept who charges $130.00. I was reading their reviews and found that someone talked about how Blaine saved the day, I read all of Blaine's reviews and they were ALL 5 stars! I immediately wrote Blaine (10-11-17) for my boyfriend who was at work. Not even 10 minutes later, I got a email responding to my question, of course he said to call to discuss further. Which of course my boyfriend called when he was free, and he loved how personable and understanding he was. With what he's going through, just to have someone be compassionate and not attack him was a fresh of breath air. To hear my boyfriend not be upset or frustrated after getting off the phone was a relief for me.

​Blaine even went above telling him how the process works when trying to serve her, and even gave him advice on what to do past that. It helped clear so much stuff up, and helped the process be more understanding. He told us it was going to be $65.00, but after giving him more information he said it was going to have to be 150.00 because where she was located. At first I was a little apprehensive because the sheriff does do it for 20.00 cheaper. But he said that he will go above and beyond trying to find her, more than the sheriff dept would do. So we went with him, gave him the information and money once we were able to. Which was about 7 days later, he served her two days after that. It happened so fast!! I was so shocked and he took pictures also, which made us so involved and aware of what exactly he was doing. After the pain in the ass it was to find her, we were finally able to get her served, with the help of Blaine we couldn't of gotten it done as easily as he made it. The feeling of relief I had after finding out he served her, I honestly would pay him any amount of money! I will use him again and again for any future needs. I'm so happy I found him! Even the clerk got a good laugh of the picture you took of her, she almost fell out of her chair. Thank you so much again! 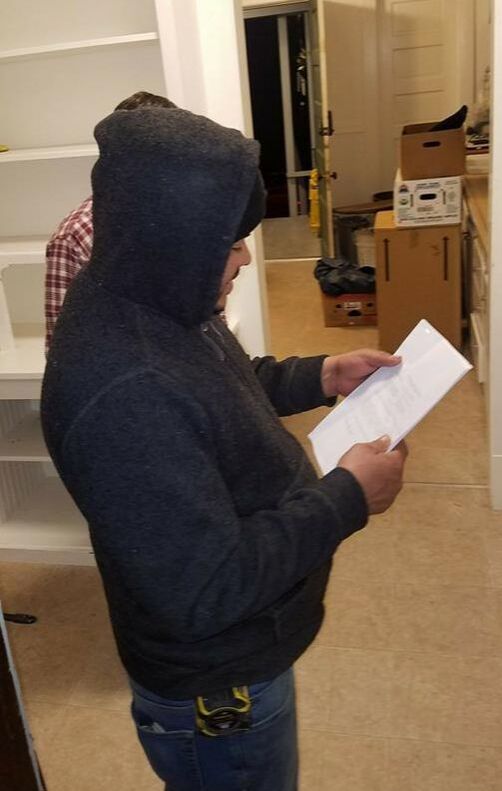 As you can see by his tape measure, this man is a  contractor. An alleged scam artist, that is unethical and takes advantage of hard working people.

​      I was the THIRD process server hired to get the paper in his hands.

​     There were actually two separate clients that I was retained by on this one case, and the total amount claimed, was about Forty Six Thousand Dollars. A large sum of Money. It took me some time to serve him, and I used multiple techniques but I stayed on it until the job was complete.  I put a lot of time and effort into this serve and had to dig deep to outfox this dodgy defendant.

I will do the same on every serve. 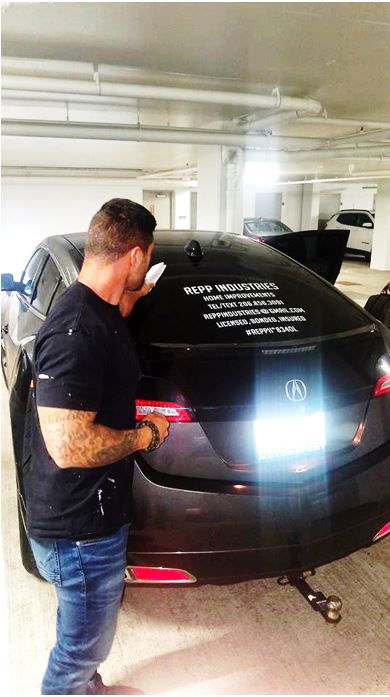 This couple was upset when  I got them served. They were also contractors and thought because they lived in a secured building, that they were safe from “Big Smoke”. On this serve I had to penetrate a secure parking garage, part of the reason this crafty couple thought they were safe from being brought under the jurisdiction of the court.​

This is what happens legally when the affidavit is filed, swearing under penalty of perjury, that I served the defendant / respondent in a true and correct manner. What these two didn’t know, was that I had also gotten past the coded security doors and actually been up to their unit. I will do what ever it takes to ethically get the job done.........
The reason I am sharing the story’s of these complex cases, is to show you the length and depth of what it takes, to get some of these difficult people served. The people that think they can avoid, or hide from the process server. Sometimes I deal with angry or threatening folks as well. I have had dogs let out, the police called (as you can see in the top photo), firearms and other weapons brandished, and numerous verbal and legal threats spewed at me in anger. I’m sure you have seen in the news, that on occasion process servers do get shot. I have to use tactical and situational awareness at all times. Even if I am serving your grandma. LOL

So when I give you a quote , please consider these above mentioned factors, and also consider this. I may have to drive many miles, late at night or in the dark, to find that your defendant/respondent is simply not home. Now I have to come back and try again, which is money and time lost for me. I may get a bad address and find out the person doesn’t really live there. It may take surveillance, or having to breach a building like the example above. My point is, that it is ME taking the risks and using my experience to outsmart these folks. It is ME keeping a buffer of safety and legality between you and the defendant/respondent. I have come in behind other servers and even law enforcement (which increases your financial loss) and succeeded where they have failed (middle photo).
​
So if you want to hire one of the best, and feel confident that your case will be handled with the utmost of care and professionalism………Call “Big Smoke”  (425) 941-5572

It takes a special kind of professional to navigate the legal realm-- alongside the matters of family/kin-folk-- with dexterity and sensitivity. Big Smoke did an excellent job of this and at the same time maintained a friendly, upbeat attitude. I sincerely appreciate his work and hope that he continues to do it. --

Blaine was easy going when it came to coordinating this serve, ultimately coming on a moment's notice to get the job done. I had a lot of confidence in his ability to get the job done right, and he did. Thank you, Blaine!--Greg Nance

Big Smoke and Blaine made our experience as easy as possible. Great communication, punctual service. We will absolutely use him and Big Smoke for all future legal services. Seriously couldn't give a higher recommendation for a business.-
Greg Brumann--CEO & Creative Director at GB Productions